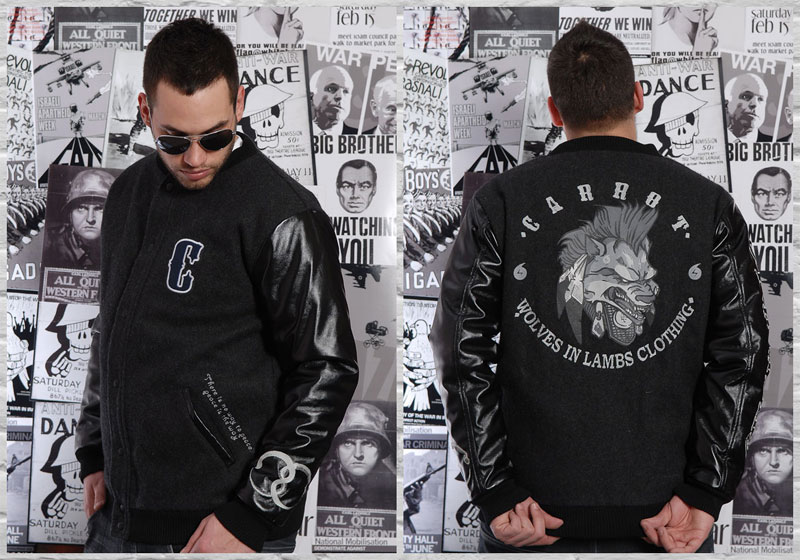 Carrot Clothing’s spring line is a great mix of skate, street and the middle finger. Each design true to the nature of the tee and even truer to the nature of the street. In addition to their main Spring 2010 line they also choose to go a direction  reminiscent  of the founder himself and his experiences, both as an artist and as a person.

The first thing that made this company particularly interesting was its back story. The founder and designer, Alex Gligorich, began making shirts for friends and family in a politically torn Syria in the 90’s. His anti-war message, although courageous, landed him in jail and at the mercy of unforgiving local authorities for spreading alleged â€œterroristâ€ policies. He has since joined forces with other people of the same mindset, from street artists to skateboarders to establish Carrot Clothing, a brand whose very essence is based upon the underdog, family relationships between art, skate and street communities. The Spring 2010 line, called Fuck War, is exactly how it sounds, ballsy, outspoken and real. Featuring mens hoodies, t-shirts, button-up shirts and even a varsity jacket, the line represents an in your face attitude sorely needed by any fashion conscious war protester. Many people underestimate the power of fashion to persuade and express things as serious as political opinion. If making t-shirts can get you thrown in jail, that alone is proof that the message was seen, heard and affected people. Heres your chance to do the same! “Carrot promises to continue its journey with the hope of inspiring people in the same way that they themselves have been inspired by the remarkable feats of others.” – Carrot Clothing

Keep your eyes peeled for this awesome line at local retailers. Check out more about the company and where to buy their swag at. www.carrotclothing.net