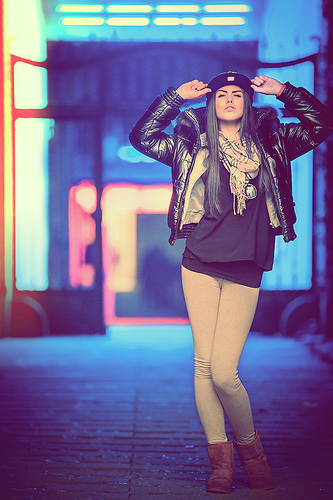 Every so often, leggings make a major comeback. They don’t ever really leave but I remember when just a few years ago I was “known” for being the girl who always wore leggings, people would even identify that I had been to south american saying I had “picked it up” there. However, I was wearing leggings long before that. Boots and leggings are a staple for me, when I get a chance to leave the house that is, and always will be.

In the winter, it’s a great way to keep your legs warm and still look cool. We all get tired of wearing jeans and I’ve never liked wearing tights, so leggings have been my savior many times. Leggings are also awesome because they come in so many – unfathomable – patterns and designs. I have leggings from Lovely Sally with wolves on them, ones with smoke, (a swimsuit made by them) and a new pair or leggings I got from my best friend featuring the most amazing illustration of a hell like place – perfect for my biker look. Lovely Sally has leggings with horses, cats shooting lasers from their eyes, mayan characters, or you can stay safe and try some timeless solid leggings. I also collect every animal print leggings available from American Apparel.

Leggings have never left us, but wearing them as pants has really taken off over the last year and not just for tall skinny model types or people on their way to a dance party. Maybe we really are headed to a future where everyone where spandex body suits! I’ll take one in camouflage please! Tights under shorts has also been around forever, but for the longest time I only associated it with being worn by young girls whose fathers didn’t want them showing their legs. I saw it on a woman last year at the adidas

store at Times Square in New York City last year for the first time on an adult. She was tiny, south american, and wore them like it was nobody’s business. I’ve tried pulling it off a few times in the past and ended up feeling silly – plus short shorts don’t make sense to me, they just ride up in the middle and I’m not about to pay attention to that all day long.

If you can pull it off without malfunctioning shorts, I say go for it! It bears a layered, relaxed but stylish look and goes well for any time of year if you wear thicker rights in the winter – you could so far as to just wear leggings instead of tights though the more basic the better or you’ll ending having a clash party in your pants.