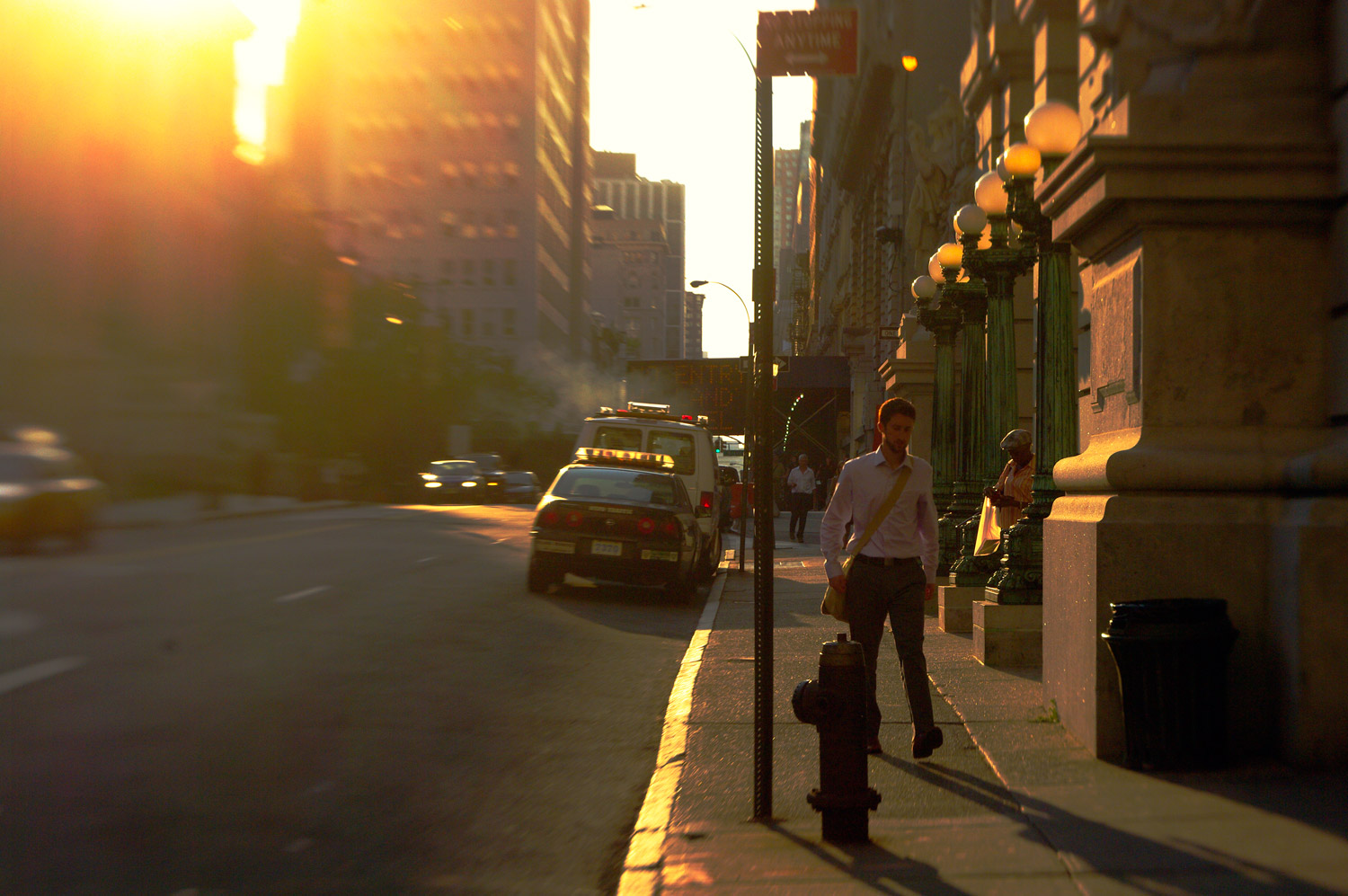 I spent the last week in New York City, staying just across the river, near the subway in Jersey City. We could see the Statue of Liberty and Manhattan from our font porch and got to walk the streets in search of culture, food and style for one awesome week.
We arrived on a Sunday afternoon, got setup, and jumped on Path (the NJ subway) to walk around Greenwich Village/West Village area to get something awesome to eat. Almost as soon as we got off the Subway and were walking down the street in a random direction, we came across Vegetarian Paradise II, an awesome restaurant full of some of the most creative veggie “meats” I’ve ever seen (and I eat at vegetarian restaurants all over the country). From there we walked around the area, covering miles of brick buildings, stoops, awesome boutiques and local faves like the New York Lomography Store, American Apparel and Grahame Fowler Original. I’ll be spending the next couple weeks putting together my NYC finds for the NewYork page so keep an eye out if you’re looking for a guide.

The next several days went pretty much the same, we stopped working about 5pm and jumped on the Subway into the city as soon as possible. Several of the days were over 90 degrees and humid which feels like 107F in the city, and even worse in the subway stations. The evenings were cooler and less busy in some ways. We stayed out till 2am, walkine 3-6 miles a day, covering China Town, East Village, Hell’s Kitchen,  Brooklyn, West Village, Lower Eastside and even a got a little Coney Island action on the last day. The trip wasn’t planned but nothing needs to be planned in New York. You will never run out of things to do, even if you don’t go to museums, galleries or shows. Just walking around the city and seeing the people and things going on was perfectly fine with me.

I spent much of my time staring at people’s shoes and style, though not taking a whole lot of photos of people – just analyzing and absorbing the current popular looks that the rest of the country looks so longingly at.

Websites like The Sartorialist and of course films, gave me the impression that most central New Yorkers were very well dressed, influential, slick and sometimes well off people. Going there and seeing people on the subway, walking around all kinds of neighbourhoods in the city and eating in restaurants from greasy to candle lit, I could definitely gauge that New Yorkers are anyone and everyone. Meaning they can look like anyone from anywhere and you may never know their home town. I paid close attention to the hippest residents as well as the regular’s who have better things to do than worry about their flawless skin and clothes. The hip were clean, their clothes look new, legs were shaved and tan (but not too tan), teeth were nice, hair was perfect and they looked hot – but the vast majority of people going about their daily lives in the city were as average as anywhere. They had worn shoes, old clothes, unpopular style or no style at all. They dressed like cat ladies and old train collectors, like nerds or people who basically thought nothing of what they wear at all.  I think the fact that this was so made New York and New Yorkers so much less intimidating. I had built up this city in my mind since I was a child in a small town, telling my mom I would be living in Manhattan when I grew up and that small town life was not for me. I had at some point turned the city into such a fantasy that I let the billboards, fashion ads and many of my favorite movies get the better of my logic and had really believed that everyone in NewYork would be 100 times better dressed than me and mostly be just about the coolest people on the planet. These were all subconscious thoughts but nevertheless, relevant. In fact the people that did look practically perfect or out of some American Apparel ad, really just looked uncreative – like they saw an ad on billboard and jumped right on the trend train. Overall, the fact that New Yorkers were not people from the movie Surrogates was an enormous relief. The amount of people didn’t bother me, nor the traffic or noise and I could totally see living there full time.

I definitely fell in love with New York. Walking around the NYC, and during our subway rides, I spent a lot of time just looking at people’s shoes and clothes, trying to get an idea of what the style really was for this summer in New York. Many classics are sternly in place, men seem to love their Keds and women their flat sandals. Long skirts and short dresses were rampant, crop tops and body suits common, shorts with leggings under them were a refreshing sight after the atlantic coast strip tease and crop jackets high waisted harem pants gave girls an extra chic look. Things like fake eye glasses are still in somehow (hipster styley), and I saw almost no t-shirts, boots or skinny jeans at all. Maybe it’s the season, and the fact that the first half of the week was a heat wave, but most people were pretty much dressed in light summer dresses and flat sandals.

Here are some of the styles I saw, and some I wish I’d seen more of. I was surprised by how many people I saw that didn’t look that original, but really, that’s anywhere you go in the world. Street Fashion doesn’t just jump in your lap. Hopefully I can go back soon and take some photos and hey, New Yorkers, Post to the flickr group!!!

A Very Cute Outfit
by (the) Fantastic Voyage 6 thoughts on “I Love New York! A week of sizing up the style and myth of the legendary city.”