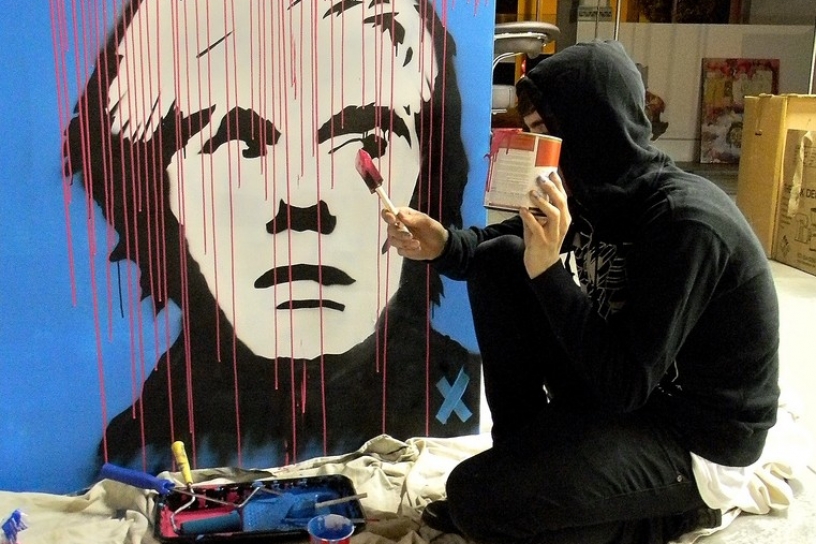 Los Angeles – Known Gallery is proud to present MIND IN TRANSIT, an exhibit of new solo work by London born graffiti artist/painter CEPT and Los Angeles native street artist/painter THANK YOU X. In the project room, world famous graffiti artist REMIO will exhibit a new series of canvas paintings.
This is first U.S. exhibit for British artist CEPT. A legend of the London graffiti scene since his youth, over the last 20 years CEPT has expanded to mural painting, collage artwork and incredible immersive large-scale multimedia installations. His artwork has exhibited all over the globe and this new series is the beginning of the next evolution in his gallery work, incorporating figurative elements and art history into abstract painting. Very inspired by the arrangement and collation of sampled music, CEPT paints the way he listens to music, allowing the variety and remixing of sounds to open him up to constructing something new. His paintings combine rich colors and romantic images of yesterday with slick pop iconography of today. Mixing the old and the new influences the visual worlds of his art, a future primitive. THANK YOU X became well known on the streets of Los Angeles a few years ago, largely in part to his large Warhol wheat paste. Signing THANK YOU X underneath in a gesture of anonymous gratitude for Warhol’s aesthetic of rebellious integrity, the name accidentally became the artist’s identity. Still very inspired by the pop tropes and bright colors of that NYC art scene, THANK YOU X will show new large-scale paintings featuring the canon of iconic imagery he respects. A dark background with pastel and near-fluorescent color combination, topped with a thick resin surface creates the slick glossy pop paintings that THANK YOU X both enjoys himself and continues to involve in his personal visual narrative.

The project room will feature REMIO, a renowned graffiti artist originally from Norway. His infamous tags and throw-ups can be found all over the world, led with his trademark anthropomorphic, angular, and true character in all senses of the word, “R.” He is a founding member of the Vancouver crew VTS and also part of Twist’s DFW/THR, and Os Gemeos’ VLOK.

REMIO comes from a special lineage of hard-hitting all-out graffiti artists, with a very old school ethic of getting up everywhere, but he has recently shown work inside galleries in San Francisco, Paris and Venice, Italy. This new exhibit features canvas paintings with his strong graphic lexicon of characters, symbols and shapes amongst a bright colorful background of patterns, while keeping his distinct and brilliant style of line and fluid form intact. The paintings are consistent with the genuine spirit of his graffiti, retaining his unique faces and playful mood, while living inside the very specific form of the canvas.