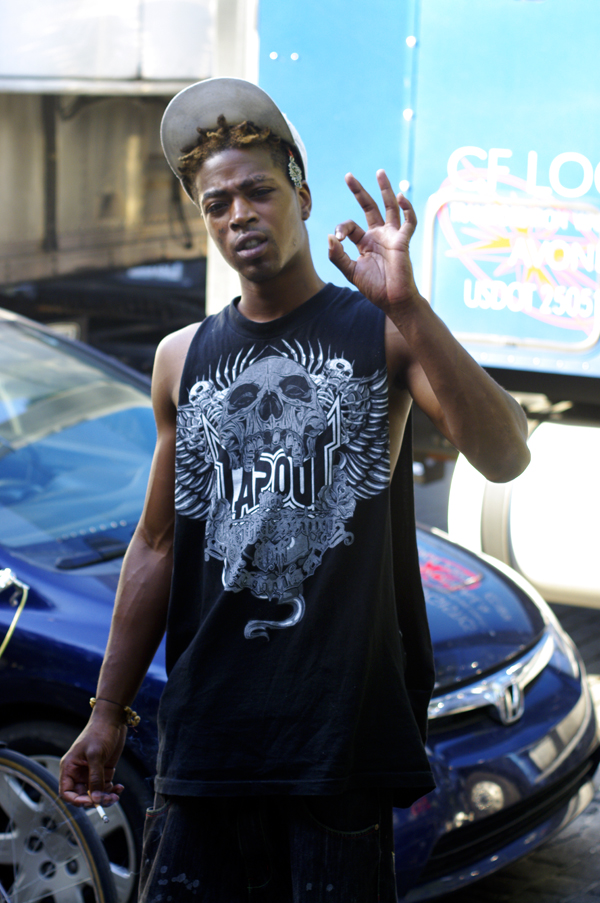 Savannah is a surprising city, small and artsy. When you hang out where the young people tend to hang out, you see a city centered around its art college Savannah College of Art and Design or SCAD as it’s known. A huge range of diversity and style is on every corner and the balmy bicycle-centric town is a great place to feel at home and see how much culture Savannah has to offer.

While sitting at one of the many places where this culture can be seen, working on my computer on a hot afternoon, most of the people I had seen were just generally “hip” with their American Apparel slouchy tops and tight skinny legged jeans. The occasional scarf or eccentric shirt pin caught my eye but it was Mickey who really turned my head. I was walking out to go home for the day when I saw him sitting just outside the door. I don’t usually stare but not only did I stare but I looked twice. I took the opportunity, having already been caught staring, to ask him for his photo. He was reluctant but ultimately appreciated the compliment and I was excited to see something new in our last few months of traveling in the southern US.

He wore a custom ripped tee, no sleeve and open sides and had some of the greatest male jewelry I’ve seen (sadly barely shown in the photos). His jeans were, in the artsy style of Savannah, splattered in paint and shredded to bits while his socks, Nightmare Before Christmas, and shoes, made the whole look complete. He really had something going on and I’m so glad I got to see it in person.

One thought on “Savannah Georgia Style”