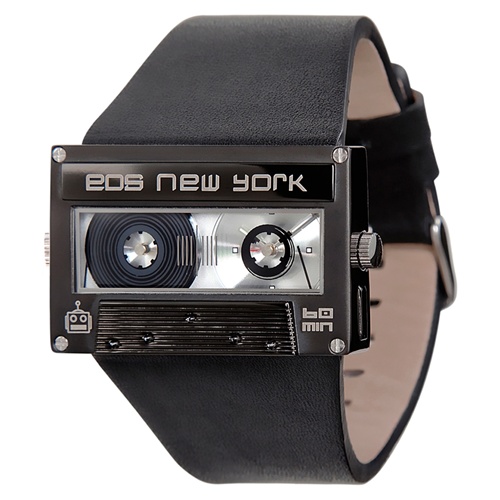 This watch is awesome, and already at the top of my wishlist (which I shamefully sent to all my family already). I tried a couple years ago to make some jewelry out of mini tapes from old answering machines, and wasn’t too successful in making them look as awesome as I’d imagined. EOS however, did,  just by making their own rather than trying to get sticky label glue off of them while trying to manage 300 yards of tape ribbon with 5 cats in the room. The Black EOS Mixtape Watch and the Tokidoki Mixtape Watch are probably the best of the bunch, but there is a gold and black and even a white and blue mixtape, probably good for blending in at an 80s themed ski lodge party or something. I think the black will go with just about anything I wear on an average day. The EOS Mixtape might seem like a hard watch to read but like any of these Japanese, binary and art watches out there today, it doesn’t take long to get used to it. I look forward to being the only one who can read my own watch. When someone I don’t like asks what time it is, I’ll just show them my mixtape and wait for the look on their face (I’m not really that mean). On the dial it has two movable discs that look like the movement of a real cassette tape. The right dial also includes the requisite hour and minute hands for telling time, and since the faux spindle of tape will never make it over to the other side, you don’t ever have to worry about flipping it over.

Tokidoki also has a mixtape watch, and I’m debating on which I like more, or maybe just going straight retro, since I actually own a record player but do not own a tape player, and getting the Tokidoki Purple Vinile which also comes in well, monochrome (Chromo Vinile) – as in – the world of black and white. Not just your basic black and white – which is pretty awesome.

Basically, these watches are awesome and while retro will always be fun, I think these watches will last me a really long time as does most of my stuff. Check them out!

3 thoughts on “The EOS Mixtape Watch”