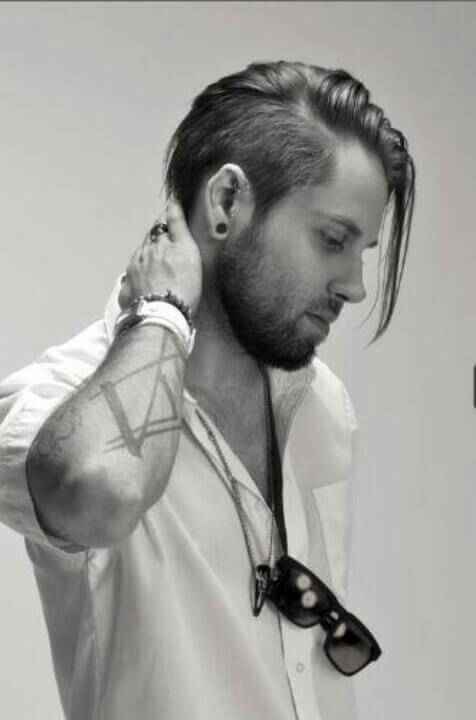 Over the last few years men’s hair styles have been getting more daring and varied, with some styles’s popularity rising dramatically just this year. Styles that seem reminiscent of the 80s, 60s, and even the 50s are merging with modern clothing and becoming something entirely new and amazing. When you think about classic hair styles, some things just don’t go away, similarly in fashion, but men have been feeling more and more free to express themselves with their hair over the last decade bringing a huge wave of classic come backs and new styles to our streets.

I honestly believe men are often discouraged from dressing interesting ,or have daring, intentional, hair styles or facial hair. This is a topic that demands closer attention and everyone could use some ideas for hair cuts once in a while. So, we decided to take a closer look and see what you all think of these trending hair styles for men .

Everyone has heard the term “comb over” and almost none of us have a positive association with it. However, this hairstyle has recoined the term and made it into something wonderful. You can ask for a combover with a smirk, then explain it other terms if you like to your barber, but all in all, it really is a combover. The style is becoming pretty popular with hipsters, and as much as I don’t do the hipster thing myself, I really like this style.

I’m not sure how easy it is to keep in place but you may need product. I like jojoba oil if I can get away with it, It weighs my hair down while keeping harsh products out, but there may be a training period where you need something stronger. Beards look great with this style.

I found the best example of this on pro fashioneer, Nick Wooster. The color of his hair add an extra element of interesting to this style but it’s actually popular with all ages and making a big comeback in Southern California. It has a sort of rockabilly look and does require a little more upkeep that some styles but once you get the hang of it, it’s golden. I’d use mousse or gel and see which you prefer for your hair thickness to get that lift. Assuming you go to a stylist, they can recommend a product by Paul Mitchell**, my personal favorite for maintaining my bleached hair.

The hightop fade is a super easy to maintain style with little to no difference from the flat top, except with a little more shape, no harsh edges and seemingly has its roots in the mohawk – or vice versa. It works for most hair thickness, but works best with curly or wavy hair. With straight hair, it almost looks more like the comb-over or flat top but you can see examples of straight hair high top fades in boy bands. This is a really popular haircut right now, seen on rappers, celebrities, teenagers, it can’t be stopped! I like it, but I think it does get a bad rap sometimes. This can be a really sexy haircut. It’s probably a little annoying to men who aren’t used to having heir in their face or blowing around in the wind, but it’s ultra hot when a guy swoops his hair out of his face, and since I’m not a big fan of long hair on men, this is an amazing compromise.

This style is basically set on the concept of the top covering the sides a little, the sides can be faded or one length, hair can be straight or wavy, and length can be from 4-6 inches. It’s cut with a similar shape to the high top fade but loose flowing, no part, no hard edges and basically “casual” looking. I love it.

I’ve always loved mohawks. I even had one for a couple years in highschool. Mine was usually back in a ponytail because I didn’t care enough to put glue in it or anything, but it was usually a bright color. I’m glad I know more about hair now and realize the mistake I made. I love the short, soft, fuzz of short hair on the sides while keeping it longer on top. The Fade mohawk or faux-hawk can be most any length on top but what makes it differ from the previous cuts is that it goes all the way down on the back. Then, you have to choose how long to go in the back and this can range from slightly longer than the sides to much longer, which borders on a mullet, but a cool one at least. When I lived in South America the mohawk mullet was extremely popular and if you can base anything on Justin Beiber’s saggy bottom pants – also popular in South America, I would say the mohawk mullet is making its way to the northern hemisphere,and not just on football players.

This is less of a haircut and more of a treatment. It’s designed to highlight curliness and bring out individual curls. You can twist it by hand, tediously, or there’s a hair sponge product people are raving out that makes the task quicker and more consistent. It’s an especially great way to start locks if you can’t twist or braid shorter hair.You just move the sponge in the same direction as your natural hair grows. Meaning if your hair grows to the right then you sponge clockwise, adversely if it grows to the left then you sponge counter clockwise. It’s a clean look that I’ve been seeing on models a lot lately. It’s slick and natural with very little upkeep, always good!

This cut is a pretty safe bet but has it’s moments. Many guys choose to spike it up at bit on top for a little bit of edge without committing to showing scalp. Most men choose this haircut because their job requires them to be pretty predictable, but it’s versatile enough if you leave it long on top that you can punk it out a bit when you like. If at any time you want to experiment, it’s easy to cut the sides shorter or grow the top longer without much drastic change. It’s an excellent transition phase, bad haircut fallback and keeps people wondering about who you really are. Preppy chic, retired punk rocker or just a sweet guy? Hmm.

There’s no denying that the man bun is a thing. In fact it’s one of the most popular styles out there right now and growing. Au natural, purposefully messy, and hopefully somewhat clean, hair is undeniably a goal for many. There’s quite a few examples of man buns out there that have started to change my opinion of them.
Hair is a hard thing to want to get rid of, and once you have a lot of it, you’ll do whatever it takes to keep it. I’ve been holding on to mine since.. well, forever. Even when I had a mohawk I kept it long as ever in the middle. The growing out stage was absolutely awful and I don’t recommend anyone keeping it that long on top unless they want to look super awkward for about 5 months while they grow out the sides.
The natural long hair look can be daring as well. It’s reminiscent of vikings, samurai, and the warriors of many of our ancestors. It’s kind of silly how locked down our society has gotten on the “length of a man’s hair”. We need to leave that behind.  Long hair is not a bad thing for a guy to have and the “bun” is just a way of taming those locks as needed. When you’re not willing to grow your hair long or just don’t like the look, but you still want a natural look and the sexy hair swooping action of the undercut haircut, go mid length! Especially if you don’t like the bun look but still want long hair, that’s not in your way, this is the way to go. You can brush is back and off to the side, part it or just let it fall wherever. As long as it’s not frizzy, it’ll look great. Again I think that oils would be great for this style, argon and jojoba are my favorites for keeping my hair in control but loose and natural.

The shaggy look is a popular hipster cut right now. It looked relaxed and “I don’t give a crap” while still being cut and polished like some hipsters like. I however think of it as sort of a book nerd look (that’s a good thing btw). It can make a guy look like he might just know what he’s talking about, and.. that he likes books and netflix, like myself. He loves craft beer, live instrumental bands and Criterion films.

Which haircut would you vote for?

**Paul Mitchell is a cruelty free brand with proven salon quality, not something most brands can say!