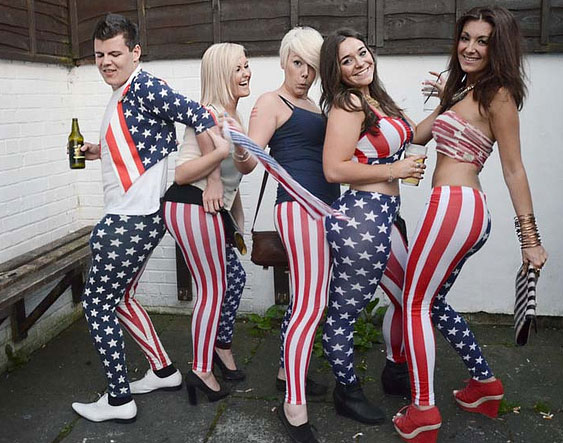 I’ve been through a few elections now and I’ve been an American* forever. I have also lived in another country when George W. Bush was president and I know how different the world is, outside the US, when the whole world hates your president. In my apartment building in Buenos Aires, I literally had neighbours who would not ride the elevator with me because of my nationality. No regard for who I voted for or the fact that I had at least left the US, just pure distaste for the U.S., and by default, me.

I also got my first taste of what patriotism looks like when I moved to Argentina just after the 2006 World Cup. I had literally never experienced true pride in my country or seen it in another country, except for the occasional old veteran’s house on my street in Portland. I envied pride in country and I hoped that one day I could feel the same.

One thing that happened when Obama was elected, that I noticed immediately, was that young people were becoming proud to be U.S. citizens, something most of them had never experienced either. Then, something even more amazing happened, other countries started to like Americans and even wear our flags as well. Flag tops, flag jeans, flag scarves, flag everything.

Much of the world actually likes our president right now and that has not happened for a very, very long time – World opinion’s of Obama vs. Romney and since I know that most of my readers are from around the world, I have no problem with saying that I support Obama because for as many people as I might alienate by taking a political position, I will only be lying to myself if I don’t.

I believe in America so much that I want it to be a leader in progressive energy, equal rights and democracy, not be a world bully who throws our hungry onto the street because a few nasty people don’t want to “pay for socialism”. I don’t want to feel like I have to wear a Canadian flag patch to be safe from violence or anger  in another country, and I don’t want to  be embarrassed again.

I also love that people can wear the American Flag wherever and whenever they want, even people from other countries, and none of us have to be called rednecks for it.

By kate with camera By Pippi Takes A Trip…

*America refers to the U.S. in this situation, aside from the fact that the whole of this side of the planet is America, everyone knows that “Hey, You’re an American!” refers to people in the U.S.. Other American’s get referred to by their country “Hey, You’re Brazilian!” and so on.