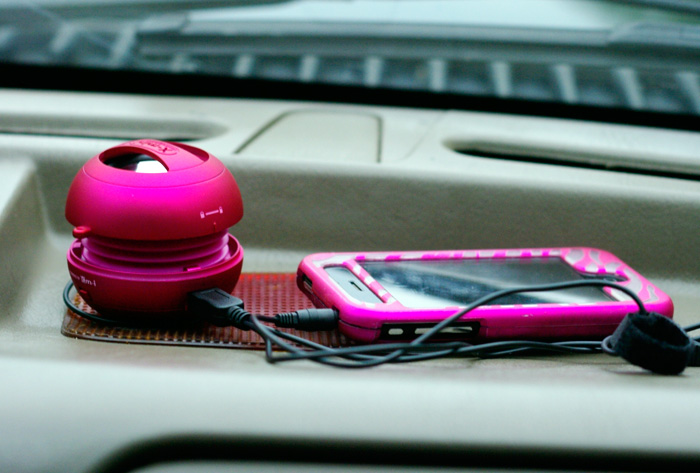 I’ve been traveling fairly consistently since about 2005 and have gotten rid of most of the bulkier things I own. I haven’t owned a record player in 2 years (yet still haul around all my records) and haven’t had a stereo or CD player in even longer, relying on my iPhone and computer for my audio entertainment – and suffering greatly in sound quality as you can imagine. Until I got this little X-Mini speaker.
Naturally, the first things I noticed about the speaker was that it’s bright pink color matched my iPhone case perfectly and it also fit perfectly in my super compact purse. It came with one built in cord to attach it to another x-mini speaker, and another cord that works as a USB charger and splits to a cord for any headphone jack (it works with my USB car charger, attached to my computer and even my iPhone wall charger).
On the way from the post office where I picked it up, I plugged it into my iPhone and set it on the dash of our massive, noisy diesel truck (used for towing our travel trailer). My boyfriend is an audiophile so I imagined he would find something bad to say but he was the first to say how great the little speaker sounded. We were both surprised when we could hear it over the engine and traffic around us. Not only that, but it was more crisp than the truck’s stock speakers, which are always too loud or too quiet and lyrics are nearly indiscernible due to the sounds it competes with on the highway. In addition to being really clear, there was no distortion as I turned up the volume and the bass makes it vibrate like a speaker several times its size. To both of us, these things were unheard of in such a small device!

It’s clear that X-mini goes above and beyond its competition and actually put some real research and effort into making an awesome quality portable speaker. I’ve owned plenty of USB and portable speakers for my mp3 players over the years and have again and again been settling for what was out there. I assumed it just wasn’t possible to make anything that small sound good, I mean, no one is going to listen to just the  little 4″ tweeters in the dash of their car and be happy so why do we put up with crappy little speakers for our computers and MP3 players? These little X-mini speakers far surpass the range of any little speaker I know. At home I had many plans for the speaker. I just recently joined XM Satellite Radio as and have become greatly addicted, but my computer speakers make music sound like its being played through a wool sweater, and my iPhone speakers,…well… are iPhone speakers. Basically, the speaker was to be put to some serious use. I look forward to getting another one and having the most compact, quality, stereo system around. Especially when I finally get the nice component record player I plan to buy sometime this year (and wont be buying  bulky speakers for). I picture myself at my next party, a string of X-mini speakers, my record player and record of Bollywood hits from the 60’s, blasting the room into the true 21st century, which for technology, starts this year by the way ( I expect a ton of awesome new gadgets this year! ).

X-Mini of course comes in many colors, red, black, white, silver (depending on style) and come in mon0 (with a buddyjack to make stereo), stereo speakers and multi function speakers, excellent for gaming and a really blasting portable DJ booth for example.

If you want to check them out and see more of their awesome little speakers, visit their website at www.x-mini.com